Swatch, no longer able to be prefixed by simply “Swiss watchmaker”, is developing batteries destined for installation in electric vehicles. A project led by Belenos Clean Power, a company of which Swatch holds a 51% stake, in conjunction with the Swiss Federal Institute of Technology is creating batteries to disrupt the current Tesla and Panasonic strong hold.

Rumors and reports of the release are not new. Swatch most recently used the 2015 Volkswagen diesel emissions scandal (settled just recently for $1bn) as an opportune juncture to promote their clean energy technology, which saw the company considering the listing of a 20% stake in the business. Swatch has since left us longing for more information.

Belenos, formed in 2008 and boasting both George Clooney and Swiss astronaut Claude Nicollier on its board, will utilize vanadium (a naturally occurring element found in 65 different minerals and in fossil fuel deposits) pentoxide as a replacement for the rare earth minerals found in most Lithium-ion batteries making them cheaper to mass produce. The reported new electrolyte composition is proposed to result in shorter charging times and a longer life span. Further technical details are currently scarce.

A prototype is currently being developed in the Renata facilities which currently makes batteries for Swatch timepieces. 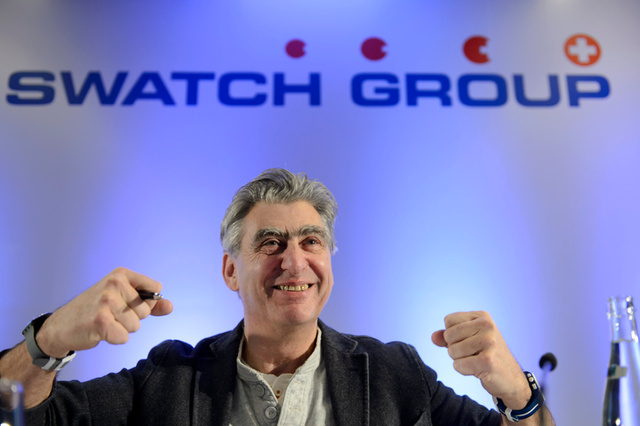 Swatch Group CEO, Nick Hayek has stated that the battery could weigh a third of the battery pack found in the current Tesla models. Weight being a critical factor in the battery game could give Belenos a market edge in other applications, for example e-bikes, e-scooters or drones.

However, for now Swatch’s focus is on the electric vehicle market with a publicized goal of selling US$10-15bn of batteries by 2020. Skepticism of this ambitious target is rife among investors. Fund Manager at EFG Asset Management, Urs Beck is quoted as saying “When he says 10, you know it can be 5” in reference to Hayek’s generally zealous statements.

Although Hayek is quoted as confirming the signing of a memorandum of understanding with Chinese car manufacturer Geely, their spokesperson was uncommittal stating in a phone conversation with Reuters “It’s early stages for both parties right now. Whether we’ll develop it together or invest in the project, that is all too far away.”.

Reducing car emissions was a passion of the late Nicolas G. Hayek Sr. and hence this is not the first foray into this market. Swatch first dabbled in electric car battery market by working with Smart on their first vehicles prior to Daimler asserting control. Other ventures have also seen Swatch in solar powered plants.

So henceforth Swatch goes into the battery market despite the companies falling profits, reflecting the chronic unease in the wider industry.